These healthy Baked Donuts are so easy to make in 20 minutes and are the perfect treat. They taste just like the real deal without the guilt.

These healthy Baked Donuts are so easy to make and taste just like the real deal!

What makes these homemade donuts healthier are a few simple substitutions. Firstly these are baked donuts rather than being fried which is the biggest difference.

When making these healthy baked donuts, you’re able to enjoy them without the guilt and still feel great afterwards 🙂

Easily made in 20 minutes and are the perfect treat for dessert and also great for kids. You can even enjoy one with your breakfast alongside coffee or tea!

Substitutions for this Baked Doughnut Recipe

Tips for these healthy Baked Donuts

Are baked donuts healthier than fried?

Yes they are, as there is only a small amount of oil used which is sprayed on the donut pan rather than being deep fried into oil.

How long can you store donuts?

Yes, if using wholefoods that are less processed, they have a higher nutritional value. Such as refined sugar free which contains far less sugar than your standard donut. 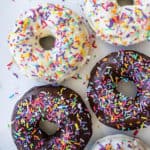