Shirazi Salad is a Persian salad made with tomatoes, cucumbers, and onion. It's crisp, refreshing and goes well with any meal!

If I had to pick my favourite salad, it has to be this Persian Shirazi Salad, also known as Salad-e Shirazi in Farsi.

You only need 3 ingredients for the base and it tastes so good with literally everything!  It’s sour, fresh and very popular to serve as a side dish.

The simplicity is the best part of a Shirazi salad. You’ll only need cucumbers, tomatoes, and onions.

Take some time and dice everything into tiny cubes, which is a little therapeutic in my eyes. Then toss in the dressing and it’s ready to go.

I’ve been eating Shirazi Salad since childhood, so I might be a little biased here as it’s in my veins, hehe.  But in all honesty, I think it will be your new go-to as it pairs well with any meal!

This salad also inspired my popular Quinoa Salad and Chickpea Avocado Salad which are a must-try.

What is a Shirazi Salad

Shirazi salad or in Farsi (Persian language) called Salad-e Shirazi, originated and adopted its name from a city called Shiraz located in Iran.

The main ingredients are tomatoes, cucumbers, and onions diced into tiny cubes topped with herbs. The dressing is made with olive oil, Ab Ghooreh (an unripe sour grape juice), and salt.

This is the most popular salad in Iran and makes the perfect side dish to complement any meal.

How to make Shirazi Salad

There are many versions of the Shirazi salad with small differences, as this salad is also very popular in Mediterranean and Middle Eastern cuisines. This recipe uses cucumbers, tomatoes, and red onion as the core ingredients. 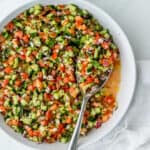