Makaroni is a Persian Spaghetti made using a bolognese style sauce, layered with pasta then cooked to create a crispy bottom called tahdig.

Makaroni also known as Persian Spaghetti has been one of my favourite dishes since childhood! It reminds me of my grandmother who would always make it for me.

Iranian makaroni is traditionally made with a meat sauce however I've put my spin on it making it with Vegan Bolognese sauce.

Once the pasta and sauce are cooked separately, they are then layered in a pot and cooked again together on a low heat. This brings a whole new flavour, without overcooking the pasta.

The pot is then flipped upside down on a serving platter and it will look like a beautiful spaghetti cake! Of course, I can't forget the best part, the crispy top which is called Tahdig.

I must admit, a lot of the pasta cooking process goes against all Italian rules. But it just works so well and every bite is so satisfying! My Italian fiancé adores Makaroni, even though it breaks all the rules.

I love serving Makaroni with a side of Shirazi Salad which gives a nice freshness.

If you’re familiar with Persian food or have seen my recipe for how to make Persian Rice with Tahdig, you will see that we often make Tahdig which translates to bottom of the pot.

It’s a golden crust that forms at the bottom of the pot during the cooking process and can be made with rice, bread, potatoes and pasta as used in this recipe.

What is Advieh made of?

Advieh is a Persian spice mix, which is typically made with a mixture of ground cumin, cinnamon, dried rose petals, nutmeg and cardamom.

Now you should know, this is how my mum makes it and you will find everyone has their own style of making Advieh. If you prefer to buy it, best to try your local Persian market.

I love seeing your creations and remakes, so be sure to tag @cookingwithayeh and share your Makaroni photo on Instagram so I can share the love 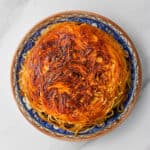 Note you may have extra bolognese sauce after layering the pasta to be cooked depending on how saucy you like it.
You can store in the freezer to use next time.