If you love the Taco Bell Crunchwrap Supreme, you’re going to love my Homemade Crunchwrap! In this recipe, I've made a vegan crunchwrap however you can also make it a classic version with some substitutions I have noted in this post.

It's jam-packed with filling, tastes even better plus it’s also much healthier than the fast food version.

When you take your first bite, the first word you will say is WOW! Well, that's what I said 🙂
With each bite, you'll be wanting more!

This Homemade Crunchwrap supreme is so easy and fun to make, kids will love to help make them too!

How to make Homemade Crunchwrap

How to fold homemade crunchwrap?

Tightly fold the edges up of the large tortilla over to the center, holding each fold whilst working all the way around the tortilla. The filling should be covered and you will have 6 to 7 folds.

How to make a vegan crunchwrap? 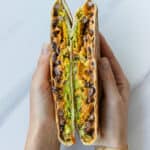 Hey everyone! Cooking and creating recipes is my ‘happy place’. I love sharing easy everyday recipes with a healthy twist that anyone can make at home. I want to show that eating healthy can also mean you are eating delicious food with amazing flavours